Reportedly a camera was found in the obstetrics Operation theatre (OT) female changing room on 19/08/2016 by a first-year resident doctor from the emergency unit with recording on it. The phone had been strategically placed in a cardboard box hanging from the wall meant for used OT caps. This box had holes in  it for the recordings to take place. The first year resident saw a few recordings, got scared and ran to RR to inform her seniors. By the time they went the servant had deleted recent videos and locked the phone. The phone was confiscated and security was informed about the same. The dean was informed and a FIR will be lodged.

Contents of the letter are as follows:

Respected Sir,
This is to bring your notice that shocking incidence has happened in Obstetric OT yesterday. The Hidden mobile camera was found in changing room of Obstetrics OT which was placed there by Servant in the same OT.
We are worried about privacy and safety part of our Faculty, Female residents of Obstetrics and Gynecology, Anesthesia, Neonatology, Surgery, Nursing staff and other doctors who use this Changing room.
We request you to consider our following demands for immediate action:- 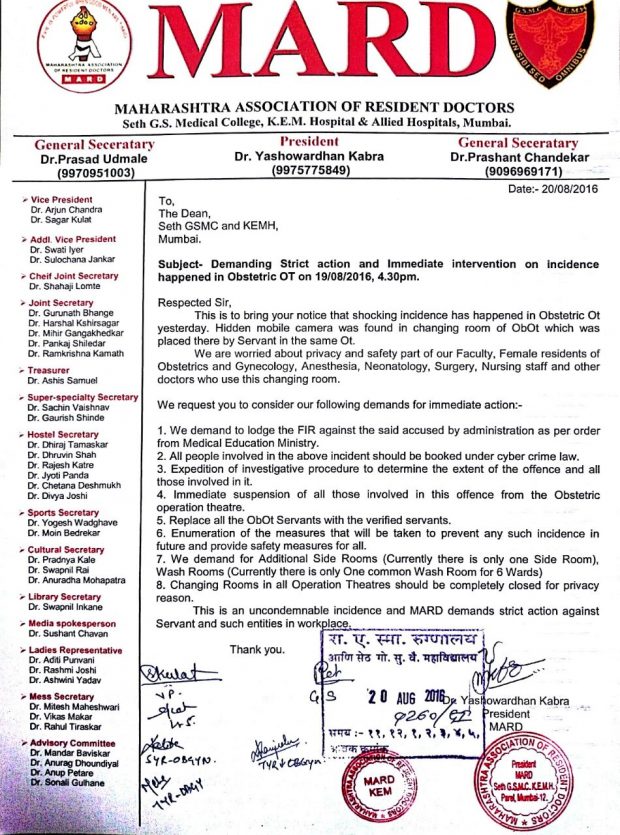 This is an uncondemnable incidence and MARD demands strict action against
Servant and such entities in work lace.

MARD has asked all the doctors to spread the news to female  anaesthetists and staff nurses and whoever has possibly used the obstetrics OT female changing room.