Centre won’t allow docs to work abroad Govt decides to not issue no-obligation certificate, a must for offshore practice

Posted on August 7, 2015 by DesiMedicos Team 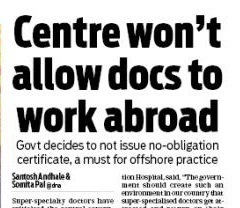 Govt decides to not issue no-obligation certificate, a must for offshore practice

Super-specialty doctors have criticised the central government’s decision of not issuing a No Obligation to Return to India (NORI) certificate, a prerequisite for doctors to work abroad.

In a step to stop brain drain of doctors from the country, the Centre revised the guidelines for NORI, according to the notification issued by the ministry of health and family welfare.

Mohanka, who went to the US in 2004 and returned in 2008, has since conducted more than 1,000 liver transplant surgeries in India.

Dr Somnath Chatterjee, another liver transplant surgeon at Global hospital, said, “In India, the number of seats for postgraduates is very low. This decision is bad news for doctors who are looking forward for training in premier institutes.”

He said the government should instead get doctors to sign a monetary bond, to ensure that they return or pay the fixed amount, rather than making it difficult for them to go abroad for studies.

Dr Gustad Daver, medical director, Sir HN Reliance Foundation Hospital, said, “The government should create such an environment in our country that super-specialised doctors get attracted and return on their own.”

The Maharashtra Association of Resident Doctors has written to the prime minister and health minister, expressing its views. “We have appealed to the prime minister and health minister to review the decision. The decision can apply to every other field, like engineering, but doctors are soft targets. The number of IITians going abroad is at least three to four times that of doctors,” said Dr Sagar Mundada, president, MARD.

However, Dr Pravin Shingare, director, Directorate of Medical Education and Research, has welcomed the decision. “After pursuing medical studies in India, they should serve the society. They should be allowed to study abroad, and, after finishing the education, they should return,” he said.

The ministry has also decided to amend the MCI regulations to extend the age of superannuation for doctors in teaching cadre up to 70 years.

In other steps to tackle the shortage of doctors, the teacher-student ratio has been revised from 1:1 to 1:2 for all MD/MS disciplines and 1:1 to 1:3 in subjects of anaesthesiology, forensic medicine, radiotherapy, medical oncology and surgical oncology. DNB qualification has been recognised for appointment as faculty, and the intake of government-run medical colleges has been increased at MBBS level from 150 to 250.