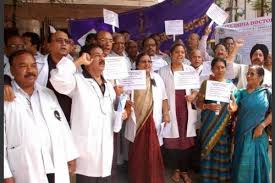 ARA: The Indian Medical Association (IMA) has appealed to doctors practising in the state not to register their clinics under the Clinical Establishments (Registration and Regulation) Act as the matter is pending in the Patna high court.

At a meeting organized by the Ara branch of IMA and attended by, among others, IMA national vice-president Dr Jitendra Kumar Singh and state president Dr Sachchidanand Kumar, doctors regretted the Act was being introduced in Bihar even though it was not implemented in any part of the country.

They said the IMA recommended certain amendments to the Act but the government got it passed by the cabinet without considering the suggested amendments. “We had, therefore, to move the Patna high court against the decision of the government,” Dr Singh said and added they hoped they would get respite from the high court.

IMA’s Bhojpur district unit president Dr Bijay Kumar Singh presided over and Dr Madhukar Prakash extended vote of thanks at the meeting at which the national vice-president and state president of IMA gave details of the provisions of Clinical Establishment Act. They expressed unhappiness over the indifferent attitude of the state government towards the cause and concern of doctors and asked why the Act was being introduced in Bihar when it was not implemented anywhere else in the country.

The said government hospitals lacked facilities while the government was trying to convert private clinics and nursing homes into corporate hospitals through this Act. The implementation of this Act would certainly increase the cost of treatment and the poor of the state would be adversely affected, they said.

Students’ protest: Meanwhile, hundreds of students of BA (part I) demonstrated in front of the office of the Maharaja College principal on Tuesday in protest against high cutoff for admission. They were also demanding increase in the number of seats.

The agitators alleged middlemen were having a field day in securing admissions for those who could afford to pay additional sums. They also demanded increased number of seats so that those students who have passed from the college might get admission.