Posted on September 2, 2015 by DesiMedicos Team 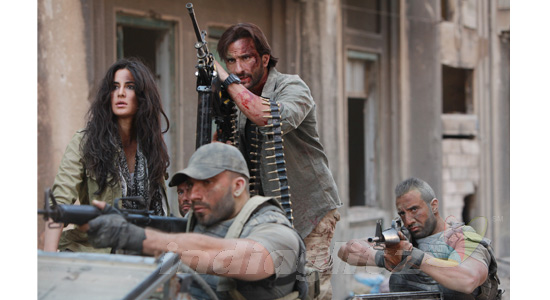 The humanitarian non-governmental organization Médecins Sans Frontières popularly known as ‘Doctors Without Borders’ is about to take ‘Phantom’ to the court.  According to the organisation the movie has put the doctors in threat due to the misrepresentation of the group in the storyline.

Established in 1971, Doctors without borders or MSF works in war-torn countries and developing countries facing endemic diseases. The doctors and nurses associated with the group volunteer to provide medical facilities in over 70 countries.

The group has alleged that this Kabir Khan directorial has put its workers at risk with its wrong portrayal in the movie, especially in sensitive regions.

“We have contacted the film’s production team and are taking legal action in order to correct this dangerous misrepresentation of our organisation and its work,” MSF said in a statement issued on Aug 27th.

The movie shows a MSF worker, played by actress Katrina Kaif aiding an Indian soldier kill Pakistani terrorists. Katrina is also shown with a rifle and pistol which according to MSF is a clear violation of their strict no-guns policy.

“Any portrayal that suggests MSF does anything other than provide medical care could endanger our patients, staff, our ability to work in places where people might not otherwise have access to healthcare and undermine our reputation,” MSF added in the statement on their website.

“None of our staff would ever carry a gun. Any portrayal that suggests otherwise is dangerous, misleading and wrong.”

The organisation has a policy of not choosing sides in conflicted regions like Syria, Afghanistan and Yemen. They also explained why it is important for them to follow strict policies, “If warring parties see aid organisations as being on one side of a conflict, we are less likely to gain access to those in need and more likely to be attacked.”

Released this Friday, this Saif Ali Khan and Katrina Kaif starrer ‘Phantom’ traces the story of a soldier on a journey to revenge the 26/11 attacks that shook Mumbai and the entire nation. The movie already invited controversies when Jama’at-ud-Da’wah chief Hafiz Saeed filed a petition to ban the movie in Pakistan and it was granted too. This fresh controversy is bound to put the filmmakers in a bad spot.