Posted on September 6, 2015 by DesiMedicos Team 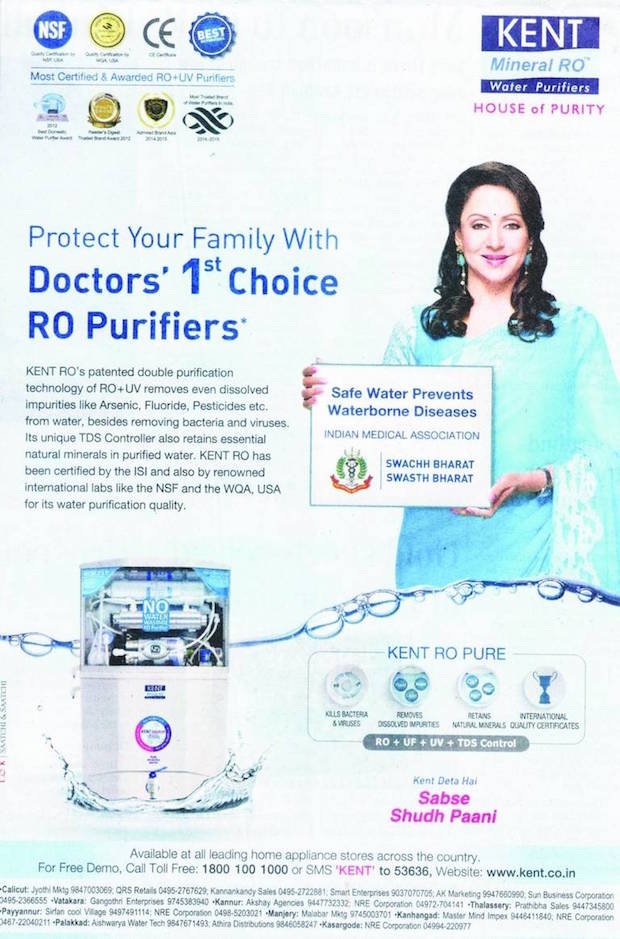 Kent RO Purifier’s advertisement claiming that it provides the safest drinking water has been held by the Advertising Standards Council of India (ASCI) to contravene the council’s code and the company has been asked to modify or withdraw the ad or seek a review of the decision by September 15.

After examining a complaint on the ad, the ASCI’s consumer complaints council ruled that the study being relied upon by the company “is not methodologically strong” and “the research credentials of the organization conducting it, Women’s Health Organization, are not well known in India”. Hence, the claim in the ad was misleading.

The complaint against the ad was filed by Dr KV Babu from Kerala pointing out that as long as brand endorsement by doctors is prohibited by Indian law, no doctors can recommend Kent Mineral RO water purifiers as the “Doctors’ 1st Choice RO Purifiers”. He asserted that the claim was false, misleading and illegal.

In its ruling ASCI noted that the claim is based on a survey done by Women’s Health Organization, but the credibility and authenticity of the certifying body was not provided by the advertiser. After considering the print ad, against which the complaint was filed, and considering the advertiser’s response, the technical experts in the meeting of the CCC, noted that “nothing is known about the qualifications and experience of the persons in conducting such a study, nor is any information available on the Project Advisory Group that has advised them”. “It is difficult to ascertain the nature and authenticity of this NGO. The journal where the study is published is not a journal that is widely known or quoted. No impact factor for this journal can be found on the web,” stated the decision of the ASCI.

The ASCI ruling referred to a letter from IMA which simply stated that Kent RO water is better than boiled water. IMA had claimed that its own analysis at Spectro Analytic Lab Limited, had concluded that boiling water for one minute does not remove dissolved impurities but RO UV treatment does. IMA claimed that its MoU with Kent was about endorsement of a health message and not of a brand.

IMA secretary general Dr KK Aggarwal had also claimed that while IMA was not under MCI’s jurisdiction, raising money by endorsing or certifying health messages was not a violation of the watchdog’s rules. The initial ads of the purifier had claimed that it was ‘accepted’ or ‘validated’ by the IMA. This was later dropped to state ‘Doctor’s 1st choice RO Purifier’ after several doctors protested saying that the earlier ad gave the impression that the purifier was being endorsed by the IMA.

ASCI further noted in its that there was no conflict of interest statements from the study organizers/authors/ or the doctors surveyed for the study as is the usual norm when dealing with branded items, such as branded drugs. “Seeing the excessive interest of the study in RO water purifiers, it would be useful to have a CA’s or some other reliable certificate from the authors and the Women Health Organisation that they (or any of their associates) have not received any support or funding for this study or any other support from any company (or its associates) involved in the marketing of RO water purifiers for a reasonable period of time, say, such as the last one year,” stated ASCI.

ASCI found faults with the sampling technique used in the so-called study saying no data was provided on the manner of selecting the sample and details of response rate of the sample was not available. Criticising the questionnaire used in the study on several points ASCI noted that the question “the most recommended ‘brand’ by doctors” is not an appropriate one because this is not a medicine/drug”. Why would doctors be expected to know the differences and intricacies of different ‘brands’ (and their different models) of water purifiers, asked ASCI adding that they may be expected to know which is a better or preferred ‘method’, not brand.