Posted on September 10, 2015 by DesiMedicos Team 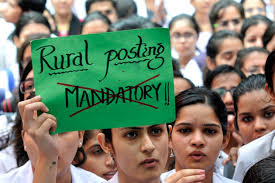 BENGALURU:  President Pranab Mukherjee has given his stamp of approval to a Karnataka law making it mandatory for graduating doctors to serve for a year in a village.

Speaking to reporters in the city on Wednesday, Dr Sharan Prakash Patil, Minister for Medical Education, said the government had received a letter to this effect from the Union Home Ministry.

The Bill, passed by the previous BJP government, had been sent for Presidential approval in 2012, he said.

With the Bill becoming law, about 4,000 fresh MBBS graduates will be available for posting in rural areas, the minister said.

Two state departments — Medical Education and Health and Family Welfare — would sit together and finalise the guidelines, he said.

According to official data, Karnataka faces a shortage of 1,800 doctors in rural areas.  If medical graduates refuse to serve in villages, the new law provides for a hefty penalty. “The law will be enforced from this year,” he said. With its implementation, the state could have a surplus of doctors serving in rural areas, sources said.

The condition is deferred for medical graduates who take up post-graduate courses.

“Once they pass the course, they have to service in the villages at least for one year,” Patil said.

Replying to questions on the Common Entrance Test (CET) medical admissions, he said the government would take stringent action against private colleges collecting more money than specified in the consensual agreement signed between the state and the managements. “If any college violates the agreement, students can lodge complaints with the one-man committee appointed by the government,” he said.

Departments of medical education and health and family welfare will jointly shut out all escape routes from rural service for medical graduates and post-graduate students passing out in current academic year. With a joint meeting of two departments already discussing the need to implement Karnataka Compulsory Service Training by Candidates Completed Medical Courses Act, 2012, health department expects to meet shortfall of doctors in its health units.

With 6,675 MBBS doctors, 2,988 post-graduate degree/diploma and 195 super specialists expected to pass out this year, minister for health and family welfare U T Khader said as per discussions held with his counterpart Sharan Prakash Patil, minister of state for medical education, the MBBS doctors will be posted in PHCs as junior resident trainees. The PGs and super-specialists will be posted in community health centres and taluk hospitals as senior resident trainees, he said.

The two departments will jointly work out the modalities on how these doctors will be posted to the above facilities, Khader said adding that in all probability it will be through counselling at the district level where the medical colleges are located. The deputy commissioners will head the counselling committees and the district health and family welfare officers as member secretaries and students could be offered places of their choice in the proposed system, he noted.

While the MBBS graduates could get stipend of Rs 54,889/month, entailing an annual expenditure of Rs 440 crore, the PG diploma/graduates will get Rs 59,680/month, an outgo of Rs 214 crore. Likewise, super specialty graduates will get Rs 67,310/month, outgo of Rs 5 crore. The proposal will entail additional burden of Rs 660 crore annually, he said adding for current year, the outgo is expected to Rs 450 crore for which approval of finance department has been sought.

With a minimum of two MBBS doctors being posted to each PHC, there will be a surplus of such doctors, Khader observed adding that the department will take a view on how to utilize their services. This extra manpower especially will ensure that PHCs will henceforth work for 12 hours from 8am instead of 4pm they function now, he said, adding committee of MLAs and DCs will monitor functioning of doctors in their respective assembly constituencies/districts.

With the two departments firm that the doctors will not get their certificates until they complete their mandatory rural service of one year, Khader said cabinet has also approved the appointment of 983 PG doctors, 350 MBBS doctors with nursing and allied staff to the various government hospitals. “We have also proposed hiking their wages and the proposal is before the finance department,” the minister said expressing confidence that this proposal will be cleared.