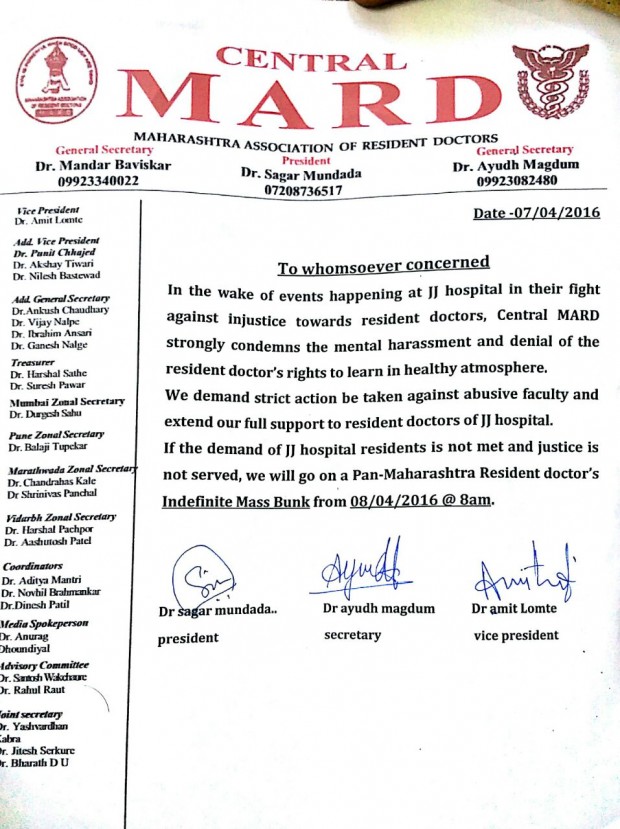 A letter published my MARD says “In the wake of events happening at JJ hospital in their fight  against injustice towards resident doctors, Central MARD  strongly condemns the mental harassment and denial of the  resident doctor’s rights to learn in healthy atmosphere. We demand strict action be taken against abusive faculty and  extend our full support to resident doctors of JJ hospital.  If the demand ofJJ hospital residents is not met and justice is
not served, we will go on a pan-Maharashtra Resident doctor’s  from 08/04/2016 at 8 am.”

MedicosPlexus team supports this strike and urges the authorities to fulfill demands of residents so that It will set an example for everyone, so that no resident doctor should face any injustice by their teachers.

Update: There is also a petition filed on change.org which describes all the alleged wrongdoings of the dean of JJ Hospital i.e. Dr. T P Lahane. You can read the petition here “Truth behind the facts of a Padmashree awardee-T.P Lahane“