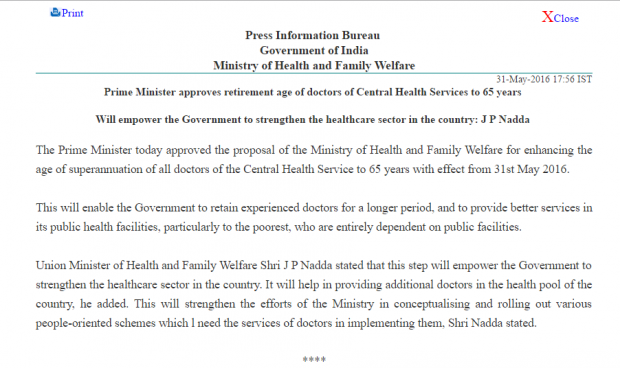 Prime Minister of India Narendra Modi has approved proposal increasing retirement age of central health services doctors to 65 years. It will be effective from from 31st May 2016. The proposal was made by the Ministry of Health and Family Welfare for enhancing the age of superannuation of all doctors of the Central Health Service to 65 years.

Union Minister of Health and Family Welfare Shri J P Nadda stated that this step will empower the Government to strengthen the healthcare sector in the country. It will help in providing additional doctors in the health pool of the country, he added. This will strengthen the efforts of the Ministry in conceptualising and rolling out various people-oriented schemes which l need the services of doctors in implementing them, Shri Nadda stated.

This approval has been posted on twitter by Ministry of Health, J P Nadda and PM Narendra Modi twitter accounts.

Central Government has decided to enhance superannuation age of all doctors in Central Health Service to 65 years with effect 31st May 2016.

With this step, we retain our experienced doctors for a longer period & provide quality health services to citizens, particularly the poor.