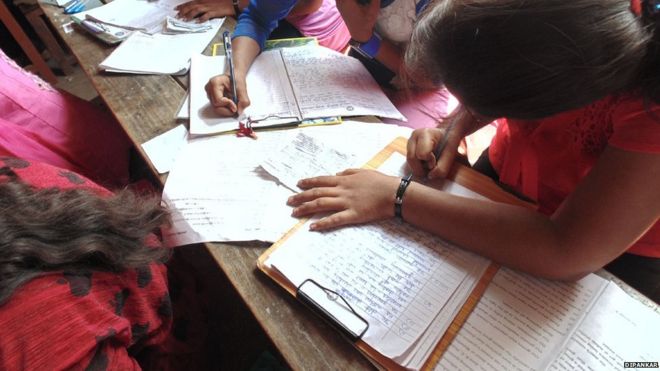 A massive medical school admissions examination scandal in Madhya Pradesh and a Supreme Court ruling that ordered 600,000 students to re-appear for a pre-medical exam have brought large-scale cheating into the public spotlight.

Cheating during exams is not new in India and despite being illegal has flourished in most parts of the country for so long that it has almost become endemic.

The increasingly inventive methods of cheating have evolved over the years to take advantage of modern technology and even social media.

This has prompted the examinations board to issue a strict set of guidelines, including a dress code for the students re-appearing for the pre-medical exam.

Here are five ingenious ways in which Indians cheat during examinations:

It was discovered that many who were caught cheating during the recently-cancelled examination had come wearing micro-Bluetooth devices and mobile SIM cards that had been stitched to their shirts.

Over the past few years, a number of candidates have also been caught using micro earphones, stitched button-hole cameras and micro earplugs.

The devices are used to transmit questions outside the examination hall to professionals who then relay back the answers.

Pens that can scan question papers and transmit the images outside using micro-Bluetooth devices are also becoming must-have gadgets for ambitious exam-takers.

And they are easily available online. One website, in fact, advertises the products as “Spy exam cheating devices particularly made for clearing tough exams”.

The increasing pace of technological development and easy availability of such devices has meant that authorities are struggling to keep up with – and crack down – on the latest methods of cheating.

Mass copying is probably the most rampant form of cheating in India.

Only recently, shocking images of mass copying emerged from the northern state of Bihar.

Hundreds of students are caught cheating in groups across the country every year, but a proper law to deal with this phenomenon is yet to be enacted.

The problem is believed to be the worst in the states of Uttar Pradesh, Bihar, Madhya Pradesh, Haryana and Rajasthan.

Many students smuggle in textbooks and notes into the examination centres despite tight security – and parents and friends have been photographed scaling the walls of test centres to pass on answers during secondary school examinations.

It is not uncommon in India to find newspaper headlines saying “3 solvers for bank exam arrested”.

In a country where limited government jobs cannot accommodate the hundreds and thousands of students who graduate every year, clearing competitive examinations becomes extremely crucial.

This has driven a lot of aspiring students into the arms of professionals who have either coached students, or cleared the examination themselves.

These services are, however, both expensive and elaborate.

The process begins at the point of submitting the application.

The solver generally applies along with the candidate and ensures that they are not seated very far apart.

The answer sheets are secretly exchanged before the end of the exam.

Another method used by professional solvers is to forge identity cards and appear in place of their clients.

The practice of bribing examiners and members of evaluation panels has gained more traction in recent years thanks to the increasing number of candidates and the rise of greater purchasing power.

In a scam involving the Madhya Pradesh professional examination, at least eight senior officials were arrested last year on charges of accepting bribes.

A BBC investigation in Uttar Pradesh state noted that bribery in universities was such an accepted practice that “there’s even a whole subset of the youth population who are brokers between desperate students and avaricious administrators”.

Mobile phone cameras and social networks are among the latest tools used by examination takers to cheat.

How it works is pretty simple – someone breaks into the examination centre lockers, takes pictures of the question paper and circulates it on social media.

In fact, an examination in Uttar Pradesh involving more than 450,000 examinees was cancelled after a leaked question paper went viral on the WhatsApp messenger service.

Similar leaks have been reported from the prestigious Delhi University as well as in some south Indian colleges.

Instances of email hacking to get university entrance question papers have also prompted authorities to invest more on data protection.