Posted on December 23, 2015 by DesiMedicos Team 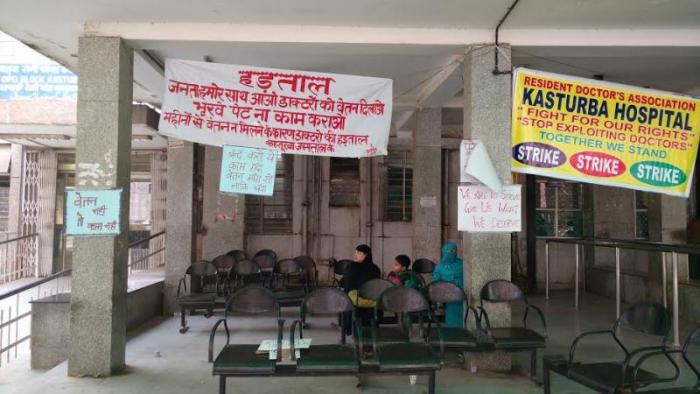 Nine-month pregnant Taranum waited for almost two hours on Tuesday for her turn to come at Delhi’s Kasturba Gandhi hospital. Restless and helpless, she was finally attended only to be told that she would be admitted later. Taranum was also told to get medicines from outside worth Rs 3,000.

She is not the only one suffering due to neglect and this is not the first time when patients have landed into trouble following strike by doctors at government hospitals. Strike called by resident doctors in MCD (Municipal Corporation of Delhi) hospitals has increased difficulties for all the patients visiting these hospitals.

Over the issue of non-payment of salaries since three months, now resident doctors in Bara Hindu Rao, Kasturba Gandhi and Swami Dayanand hospital have been sitting on a stirke since December 18.

“Counters for registration are closed. Chemist is closed. We came all the way from far-off places to a government hospital because the treatment is free of cost. What is the use? Doctors are not performing their duty,” stated Khalida, a patient at Kasturba Gandhi Hospital who had come from Welcome area.

Apart from the salary issue, striking doctors are also trying to call upon government’s attention over non-availability of medicines including life saving drugs, poor working conditions and non-transparent recruitment process followed for appointment of doctors.

“We have not received dues since three months. The junior doctors will start 24 hours strike from tomorrow and the senior doctors are on a pen-down agitation from 10 am to 1 pm. We are also concerned about the patients but somebody has to be concerned about us as well,” complained Dr Maruti, Sinha, Secretary, Municipal Corporation Doctors’ Association.

According to the senior doctors, only acute emergency cases are being attended during the strike. The doctors will continue their agitation till the demands are met. “It is like begging for what we have earned. Even if the salary is given, we get deducted amount for agitating,” stressed Dr Kriti Karnatik, senior resident doctor.

Meanwhile, Pankaj Solanki, President of the Federation of Resident Doctors Association of Delhi (FORDA), informed that the group has already met state health minister in this regard. “We met Satyendra Jain today and he has assured us to take up the matter. He is of the view that MCD hospitals should be merged with the Delhi government hospitals,”