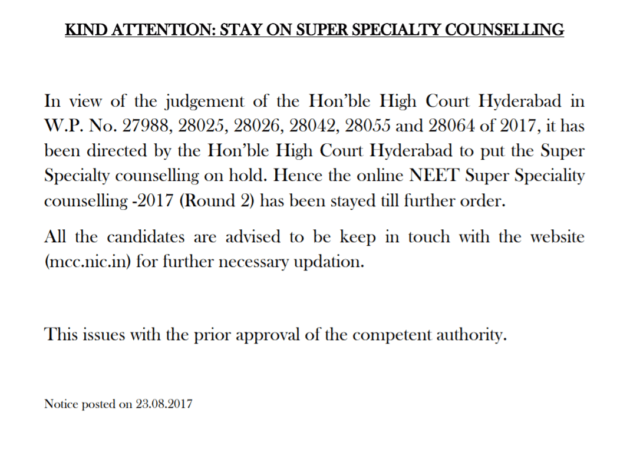 The judgment is as follows:

Petition under Article 226 of the Constitution of India praying that in the circumstances stated in the affidavit filed herein, the High Court may be pleased to pass an order or orders or a writ, more particularly one in the nature of Writ of Mandamus declaring the Note No.5 in G.O.Ms.No.109, dated 18.08.2016 as arbitrary, untenable and contrary to the very spirit of the G.O. and consequently strike down the Note No.5 in the said G.O. in the interest of justice. . .

Heard all the learned senior counsel appearing on behalf of the writ petitioners. Mr. B. Narayana Reddy, learned Assistant Solicitor General, seeks time to get instructions.

Artificial barriers, when created by men, for short term gains, boomerang upon the very same persons in the long run. This is established by the batch of cases on hand.

The petitioners were allotted to various medical colleges through out the country for admission to superspecialities in medicine. The allotment was obviously on the basis of a common counseling conducted by the Centralized Agency on the basis of the Common Entrance Test.

Incidentally, the petitioners hail from the States of Telangana/Andhra Pradesh. Though all of them studied MBBS in other States and became non-locals, they were granted admission to postgraduate courses in medicine in various colleges in the States of Andhra Pradesh and Telangana, only because of their roots in these two States. In other words, the petitioners gained admission under the 15% quota available for non-locals in the medical colleges in the States of Telangana and Andhra Pradesh, by virtue of satisfying the criteria laid down in G.O.P. No.646, dated 10.07.1979.

It is relevant to note that this Government Order was issued, in pursuance of the Presidential Order issued under Article 37ID of the Constitution.

In a writ petition filed by another set of candidates, we granted an interim order, in the light of the Presidential order issued under Article 37ID for the States of Telangana and Andhra Pradesh. As a consequence of that order, the petitioners, who were allotted seats in super-speciality courses in the other States, have lost their admission, forcing them to come up with the writ petition.

Since competing claims on the basis of Article 371D and the Presidential Order have now arisen, the issue requires to be considered, only along with the other writ petition where a prayer for implementation of Article 37ID and the Presidential Order is sought. Hence, all these writ petitions shall be posted tomorrow along with W.P. No.27162 of 2017.

Till tomorrow, further counseling for superspeciality courses shall be put on hold by the respondents.