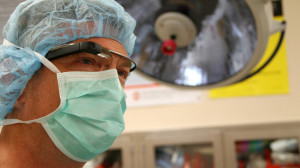 A surgeon in Ohio live streamed  a knee surgery to remote colleagues by wearing Google glasses showing how technology could change the future of medical science.

Dr. Christopher Kaeding, a surgeon at the Ohio State University Wexner Medical Center, performed a surgery on a 47-year-old patient’s injured knee ligament, during this milestone event. Kaeding wore Google Glass during the surgery to show his live point-of-view to people miles away. When he first put them on, he said that it mildly disrupted his routine. “In surgery, you have a certain feel,” he told ABC News. “But I was surprised how quickly I felt comfortable with it.”

In this particular procedure, Glass’s sole purpose was to allow Kaeding to join a Google Hangout, Google’s video conferencing service. Also in the hangout were Robert Magnussen, an assistant professor of orthopaedics at OSU, as well as few of the medical school’s second year students.

Ryan Blackwell, one of those students, said that Glass can give students an insider’s perspective. “Most students have shadowed a surgeon in the operating room, but you’re often stuck on the outside trying to get a glimpse of whatever you can,” he said. “But with Glass, you get that [surgical] experience that weren’t able to get before.”

In addition, the short battery life may mean that Glass isn’t suited for certain surgical procedures that take a long time. Even though an ACL surgery is pretty quick, Kaeding was prepared just in case. “I had a reserve battery in my pocket,” he said. “It should extend by about two hours.”

Other doctors at OSU have said that Glass could also be used to display a patient’s X-rays, as well as both pathology reports and reference materials pertaining to the surgery. Though Glass has potential, it’s important to keep the focus on the patient.

“Surgery is always linked to technology,” said Charles Limb, an associate professor of head and neck surgery at Johns Hopkins Medical Institute. “But in many surgeries, less is more. Having access to all of these things might not help the patient even an iota.”

Kaeding knows that Glass is still a prototype at this point and that there’s room for improvement. But there is one thing that even he can tell is a huge benefit this early on. “Once it’s on, it’s hands free,” he said. “You don’t have to break sterility so you won’t have to regown and reglove.”